How to use the Docker Desktop extension in Portainer

Docker Extensions, the new program announced on 10th of May 2022 at DockerCon, brings a host of new functionalities to the Docker Desktop experience. Portainer.io announced the release of the Portainer extension on Docker Desktop, bringing ease of management and visibility to millions of Docker users. In a step towards a radically simplified and integrated container management ecosystem, the Portainer extension will bridge the gap between Docker Desktop and Kubernetes while offering unparalleled control to developers.

The latest version of docker desktop is available with support for extensions. You can install it from here.

Once it's done, we'll see that portainer is now available to us in the sidebar. Let's go ahead and click it to see what happens.

The successful installation of the portainer will look like this.

Now that we have used portainer extension, let's go over what's different.

If we look around the portainer extension, we can see our quick setup visit here, which is a relatively new feature we added to easily be able to connect to environments in a fresh instance. 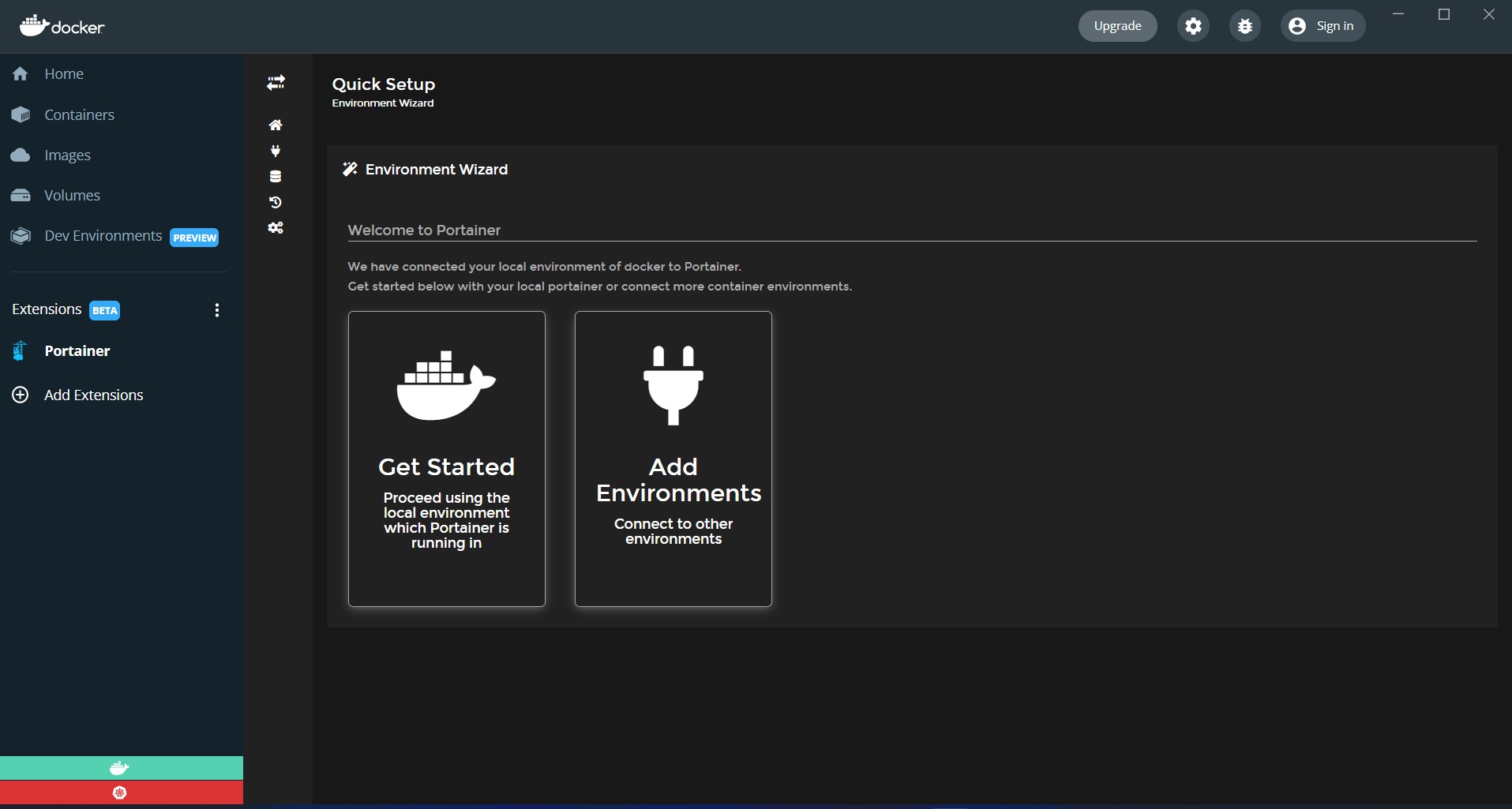 The dashboard shows all the resources that we currently have in our local docker environment.

Let me show you making some changes in my dashboard.

I want to deploy a stack, so I will click on the stacks item, which helpfully takes me to the stacks view, and now I will just deploy a stack the normal way you previously would not for container.

I will give it a name (Ex : test_stack), and then I will paste in a sample stack that I have put together for this demo and finally let's click on the deploy button.

Now, that the stack is successfully deployed, let's check out everything that was created by our stack.

If we click on our stack, we can see listed below the container that was defined.

Clicking on our container, we are taken to the container details view, where we can see all the information about our container that we want to find out.

Down the bottom, we have the network that was created by our stack definition and the volume, and they are both linked to this container.

Clicking on either of these, we are taken to the details view of that resource.

You can also create volumes and networks manually through portainer along with all the other docker resources, so let's check this out.

Next, we have images, which is a list of all the images in docker and will give the ability to build an image, and we can also import from a Dockerfile or pull from docker hub.

Next, is networks and as we can see below a list of system networks as well as my user generated network, and we have the ability here to add another network if I wanted.

The same goes for volumes we can see all the volumes below, the status that they used or unused, and we have an Add volume view.

Next, is the Events generated by docker, It's pretty simple just a list of events.

The host tells you about your host name and the resources available. Under here, we have Setup, which is a bunch of different settings.

Let's discuss a few of the convenience features that make portainer really shine.

Let us head over to the registries view, this is where you can define credentials for multiple types of registries to use in the application.

It supports different types of registries such as DockerHub, ECR, Quay, ProGet, Azure, Gitlab or any other custom registry type that supports the docker v2 registries API.

To illustrate how to use this feature I am going to add an example registry.

There's a few place in the application that you can make use of this registry just added.

These are another awesome feature that works super well when running the portainer extension, it allow us to deploy containers without having to configure.

In custom template feature, we can create one from a compose file containing multiple containers such as front-end, back-end, and database and deploy all of that in seconds.

If you've reached so far thanks for reading, hopefully this blog has helped you get a better understanding of how to drive the portainer extension.